Nearly 30 years of generous investment in the
artistic process. 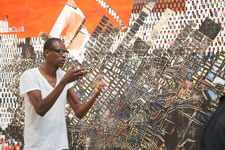 As a research and development laboratory for the arts in all disciplines, the Wexner Center has offered significant support to artists in myriad ways since its inception in 1989. Residencies and commissions sponsored by the Wex have allowed hundreds of artists working in all disciplines from around the globe to create new work or explore new creative directions. The center’s support for artists underscores a core commitment to inspire cultural curiosity and fuel the creative expression of our time, while complementing Ohio State’s mission as a leading research institution. Works produced under the auspices of Wexner Center residencies and commissions often premiere here and then travel the globe, and they virtually always allow for meaningful interaction among the artists, the university community, and the public at large. 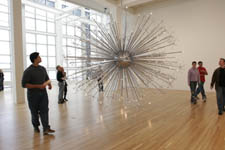 Among the diverse artists who receive production assistance each year, recipients of the Wexner Center Artist Residency Award constitute a special category. A handful of artists spanning all creative disciplines are selected annually by the center’s director and curators to receive this distinction. The Artist Residency Award program (previously known as the Wexner Center Residency Award program) offers the most substantial support: considerable financial resources, along with technical, intellectual, professional, and moral support to develop new work. A total of $200,000 annually is earmarked for distribution across the center’s disciplines—visual arts, performing arts, film, and, soon, education. Each residency is specifically tailored to the particular needs and rhythms of the artist. We in turn bring the full resources of the Wexner Center and Ohio State to their pursuits, often brokering collaborations across campus—not only with faculty, staff, and students in the arts and humanities, but with those in the sciences, as well as in business, law, and medicine—and in the broader local community. 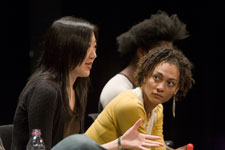 Click here to read more about our latest recipients.

​Film/Video Studio Program, Commissions, and Other Kinds of Artist Support

Throughout the year, the Wexner Center also is involved in commissions of new work by additional individual artists and companies, some of whom come to work at the center. Some projects involve working in the Wexner Center's Film/Video Studio Program, others relate to specific exhibitions, still others are connected to commissions and co-commissions in the performing arts. Here are a few recent examples. Composer/guitarist Bill Frisell’s collaboration with filmmaker Bill Morrison The Great Flood was co-commissioned by the Wexner Center and performed here March 31, 2012. Choreographer John Jasperse’s dance work Canyon, co-commissioned by the Wex and BAM Next Wave Festival, was performed here in April 2012. In the fall of 2011, Paula Hayes designed and installed a permanent roof garden for the Wexner Center, at the time of a solo exhibition of her work in our galleries. The garden sits above the center’s underground Film/Video Theater just outside the Wexner Center’s entrance. These are but a few of the recent projects created under the auspices of Wex residencies and commissions outside of the Wexner Center Artist Residency Award Program.