A moving representation of her life in film and life with cancer, Evidentiary Bodies is Barbara Hammer’s first and only multichannel video installation. Within each of the video’s three frames, wide shots of Hammer’s nude body are juxtaposed with close-ups of her head and face, which are illuminated by projections of her own medical diagnostic imagery. Multiple images of Hammer, often moving in slow motion, appear simultaneously and are mirrored and superimposed as she seemingly tries to break free from the frame. In the video’s final tableau, the three screens form a continuous image of a moving 16mm filmstrip, colored in brilliantly saturated tones of blue and gold. Hammer’s body appears ghostlike as she walks through the filmstrip, eventually lying face down and dragging her body across the frame-within-a-frame image until she dissolves into the speckled blue emulsion. Evidentiary Bodies incorporates imagery from throughout Hammer’s career: footage from Sanctus (1990) is projected onto her body as she performs, as well as images from the series Chest X-rays (2015), and Blue Paint Film Scroll (2005), a larger-than-life scrolling photograph made from sections of chemically treated 16mm film. Hammer worked collaboratively with cellist N. Scott Johnson to create a haunting and distinctive score that matches the emotional intensity of her images. Evidentiary Bodies evolved out of a live performance of the same name staged at Microscope Gallery in New York in 2016 as part of Dreamlands: Expanded, a series of immersive cinema events organized in collaboration with the Whitney Museum of American Art.

Evidentiary Bodies had its theatrical world premiere at the 2018 Berlin International Film Festival and will be shown as an immersive, multichannel installation—as Hammer intended—in the exhibition Barbara Hammer: In This Body, June 1–August 11, 2019, at the Wexner Center. 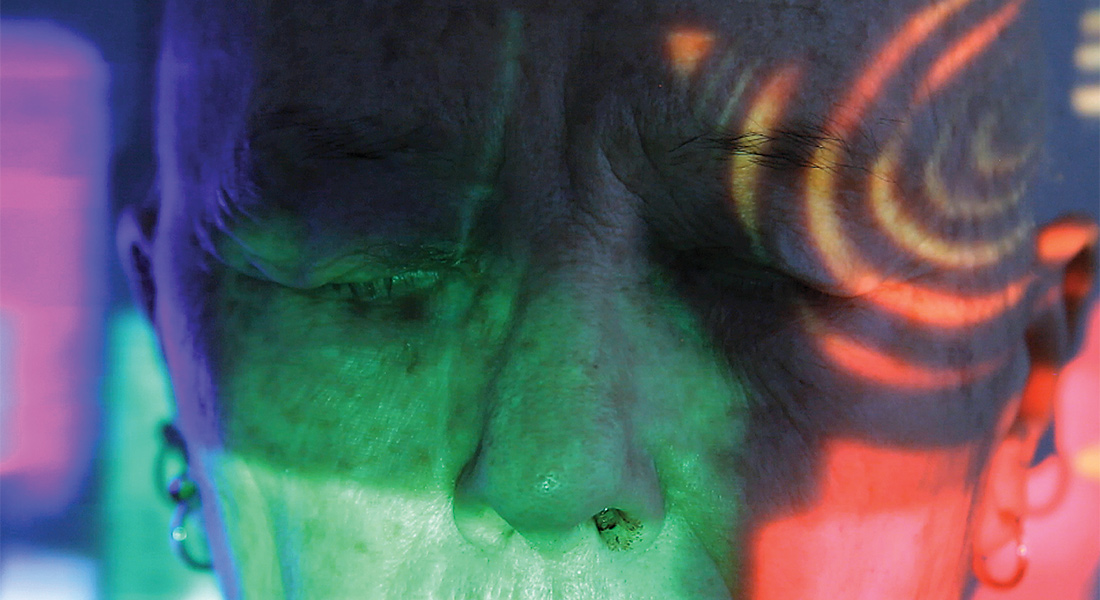