The second part of Jennifer Lange's conversation with filmmaker Gabriel Mascaro focuses on his contribution to Cinetracts '20. It follows a young woman as she drives into a large stadium parking lot set up for an outdoor film presentation on a giant screen and her reaction to spotting a drone filming from above. You can read the first part of their conversation, centered on Mascaro's feature Divine Love, here.

We talked about the Cinetracts ‘20 project in depth about a year ago when you visited the Wex to screen Divine Love. A year ago, we obviously had no idea what this year was going to be like, but we felt 2020 was going to be an eventful year simply because of the US election. We were inspired by the French Cinétracts project and I remember you and I discussed the technological difference between 2020 and 1968, when the original films were made. The purpose of the original Cinétracts was to show people who weren't out on the streets what was happening on the streets and to communicate that and have this flow of information. And, as we talked about last year, today we have cell phones with cameras that record video and nothing happens without it being documented, recorded and then transmitted worldwide instantaneously. So, while the project was inspired by this urge in 1968 to document a country’s cultural change through protests, that wasn’t what we were asking for or expecting from the filmmakers. The project was really more about capturing a sense of what was happening in people's worlds, locally, and a hope was that these small cinematic portraits would add up to some larger global picture or zeitgeist.

Over the year, we talked through a couple different ideas for the film. Could you talk a little bit about how you approached the project and some of the challenges of the project, given our rules and also given what 2020 ended up being?

Yeah, it was quite special to be able to reflect about what's going on in Brazil, especially, in the city I come from in Northeastern Brazil and the Cinetracts kept me thinking—like a rudder—what was going on and how I could collaborate to create this panorama of the world and how could I be part of that. It was such a privilege and exciting to be thinking about the other filmmakers around the world, what other artists were doing. So, it was so fascinating to be part of this collective even though I had no contact with them directly. And the game was, exactly, the not knowing what each other was doing and when we watched it as a group of films, the result was almost like a surprise. So, it was quite exciting to be part of that and at the same time COVID was so, like, arresting everything. In terms of, what should I do? Should I leave my house? I faced a lot of contradictory feelings and the people with COVID were dying everywhere.

At some point, I saw the people coming back to the cultural life, during the pandemic, with some kind of euphoria. Like, “Wow, we can go back to the drive-thru cinemas!” It was very contradictory to me. In some ways it's nice that people want culture back and the cultural activity. They want to socialize. The cinema is part of that.

But the way that I would see these paradoxes of cinema being celebrated. It was almost like a pop vintage re-appropriation. Like, “So, we are fucked! And the drive-thru cinema is back! Let's enjoy!” And the price was so expensive, and the people happy to be in the cars, and so I came across these very contradictory feelings of people wanting their life back but at same time totally disconnected about what's going on. And a disconnect of the society, in terms of, the price was so expensive, it was such a privilege to be in these drive-thru cinemas.

And it was more about companies making marketing campaigns during the pandemic than about people being really excited to share culture and movies. I’m not sure what happened in the US but in Brazil it was so influenced by these beer companies or high-tech companies promoting this life through the cinema experience.

Here it felt almost nostalgic. There was definitely a desire to be together and to do things that felt normal, like going to the movies. But here, it was also a revival of the old drive-in theaters, which used to be quite popular but they weren’t really being used regularly before COVID. And then, at a certain point during the pandemic, the weather got warmer and people were desperate to get out. And so the old drive-in movie theaters became a thing. So, there was some sense of nostalgia around it here and it didn’t feel corporatized, but in Brazil, they would run movies in the parking lot of a huge stadium?

Yeah, in Brazil, we actually didn't have this culture that the US had, this nostalgic part of the drive-thru culture. So, they tried to import some of that culture that was not part of our cinema culture, and they started to scout where they could find an empty space for making drive-thru culture pop up from nothing. They were looking for airports, and parking lots, or any kind of possibility of creating something like that could update this cultural marketing during COVID.

I'm not accusing the people that went to this nostalgic experience. I was just reflecting about this phenomenon of vintage culture being celebrated during this crazy pandemic time and how the cinema was being used. And dealing with this call to reflect on the world and on art. This also came to me as an exciting reflection. And, in some way, we have this normalization, banalization of the drone tool as a device of cinema. It’s everywhere. Everything is with drone now. If you want to do something cool, you use drone images.

So, I started to create these kinds of connections. We were facing this very religious moment, fighting against science and these zealots’ perspective, the zealot’s point of view about society, like, the god’s point of view, looking from above. And I tried to use this drive-thru experience to make a comment about this god's point of view, filming these drive-thrus and the people in the drive-thru watching any kind of movie, and this rebel, goes to the cinema, to the drive-thru, to “Pow!” bring the drones down. And, it’s a kind of statement against these systems that are using religion against science.

It's like David and Goliath, you know, with the little individual against the capitalist behemoth. Your film stood out among the other works because it felt so “meta.” It’s a commentary on the conditions of watching cinema and of being watched or surveilled through these ubiquitous drones. We talked about this when you first submitted your film, but it felt like such a clear way to end the program. Like, the drone gets taken down and the truck runs it over and we cut to black. When I showed it to Chris [Stults, Associate Film/Video curator] and Dave [Filipi, Film/Video Director], I said, I think we found our ending.

Because that was a challenge for us, how to order the films and how to create something cohesive from all these diverse works and highlight the relationships between works and leave room for people to make their own connections. And, when you submitted yours, it immediately felt like an ending.

(Laughing) I was the last one to send too, that's why!

(Laughing) No, you weren't, you weren't. Beatriz Santiago Muñoz sent hers shortly after you sent yours. And her film was also kind of “meta,” about the conditions of making films but more specifically reacting to the question of what do you do when you can't go outside and make a film? How do you find creativity during a pandemic? For her, the answer was going into the jungle with her kids, because that was a safe place to go during COVID, and documenting them making a film. So, she’s behind the camera, watching them shoot a film and record sound and they're talking about what the name of the film is going to be. And, after watching her film, and watching it almost right after we first watched yours, we decided that we couldn’t end it with everything blown up.

I don't want to be biblical about it but it's almost like, with her film as an ending, coming directly after yours, we’re going back to the Garden of Eden after the big bang, you know? We’re going back to some sense of innocence and hope, hope that the future generation won’t repeat our mistakes. So, when those two works came in, right about at the same time, it was, it was really beautiful for me to see how they spoke to each other.

Were you surprised by any of the works in the program?

I felt surprised about how exciting it was to see the different ways that artists, in different countries, and in different contexts were reading the politics and also facing COVID and how different countries were dealing with it. I really like the scene where the children are sleeping in a group in Thailand by Apichatpong (Weerasethakul). In the way that everyone was talking about social isolation, and to see the children together, just sleeping, was so beautiful for me. So, I’m very impressed by how we can see politics everywhere, even in sleeping children.

I just want to say thank you very much for your time. When the pandemic is over, we will look forward to your return to the Wex because you always have a home in Columbus.

Yes, thank you very much. I need to start writing a new project in Ohio so I have some creative luck! Thank you very much, it is amazing to be with you. You guys at the Wexner do very creative work and it is exciting to be in this company of work. It provokes our works and makes them feel alive, creatively, together.

Image: from Gabriel Mascaro's film for Cinetracts '20, courtesy of the artist 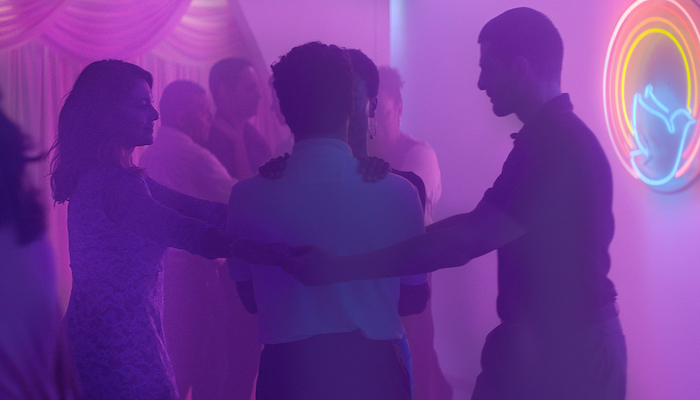