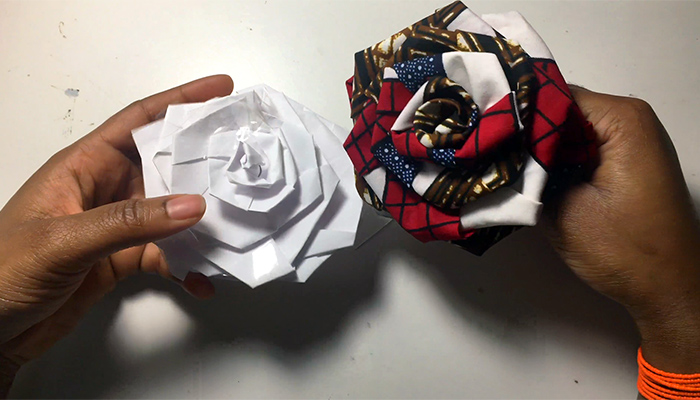 The school year might officially be done but there are more art lessons to learn from local artists! This week, Wex Education collaborator Claudia Owusu shows you how to make roses out of materials you already have at home. The fabric piece requires a little sewing but if you're not up for that or there's not an adult around to help, you can create with Claudia using just paper and scissors. Make a few flowers to adorn your room or to give an everlasting bouquet to someone you love.

Below the video is a transcript of the tutorial for the hearing impaired.

How To Make a Paper Rose by Claudia

Hi everyone, my name is Claudia Owusu, and I am a writer and a filmmaker here in Columbus; and today, I will be teaching you how to make your own fabric roses and paper roses. So all you’re going to need is just some paper, which you’re going to cut into thin scraps like so...and then you just need some cloth that you’re not using, which you’re also going to cut into scraps like this. And then lastly, a sewing kit for the cloth, and then you’ll also need some tape for the paper. So I’ll be showing you this in the next… 0.5 seconds:

OK. So first you need a thin scrap of paper like this. And then you’re just going to start by folding the paper at the tip into a triangle. And then once you fold over, you're going to do a second fold right on top of the first fold, as you can see, and then you will do another full fold.

So just to recap we started out triangle fold another fold on the triangle and then another full fold; and it has to be a bit circular. That's going to be the middle of the Rose. And so after that we're going to just go out like this. So as you can see, I'm going to take my thumb, put it under the paper, fold it under the paper and then just wrap it around so—oh, it's not perfect and it's not supposed to be, and that's what makes it a rose. So currently that is middle. And so you're just going to keep wrapping fold. And then as you go, just form it so that the middle is circular.

OK. So this is what it looks like. Currently we have..we have the bud in the middle. Yeah, recap: fold, fold, I’m just going to put my thumb in the middle to make sure that each petal is sort of laying flat. You have to have a flat pedal. This is what I currently looks like and then I'm just going to take some tape. Fold it and then after the tape you should have this. So then we're going to go ahead and just add our second layer of paper; and for that we're just going to start it by folding a thin triangle,  and then putting it on there and then we're going to use a second strip of tape. So for the second strip, you're just gonna lay it on just like this and then just put it down.

Fold, turn. Fold; and it's even better if each petal looks like a triangle or has like a pointed tip.

Fold, turn and so again if you want it bigger, you can just keep adding. So yeah, this is the final product. I just kept building and as you can see, we have the bud in the middle; and then the petals all around secured by some tape.

How To Make a Fabric Rose by Claudia

So this is what it looks like for the back.I just like to get a sewing needle or even a safety pin and just sort of put it in place; but besides that, this is what you have.

Alright, so I have some thread in my needle. And so this is where you're going to need the help of an adult. You just make a small knot after you thread the needle; and so this is what's going to secure the flower in place. So you just take it through, push it through a couple of layers and then just bring it back out. So what I like to do is... I just like to leave some excess thread and then I will loop it just like how I tie a shoelace; and then just pull it, do another knot again, and then just pull it. So then after that you can just go ahead and cut off the excess that you have.

But again, as I said, this is what keeps the rose in place. So then you can sort of push down and then your stem becomes longer and then pushes the bud deeper inside. And so you can put this on a backpack, you can put this in your hair, you can attach it to a hair tie, or even a headband and just sort of wear it fashionably as you want. So yeah, this is the fabric flower and as I showed you earlier, this is also the paper rose. So I hope that you got to learn about how to make this yourself and thank you for watching.

Have a good day.