In The Box: Rise

This month’s screening of RISE is associated with Picture Lock: 30 Years of Film/Video Studio Residencies, a weekend-long spotlight on work produced through the Wex’s Film/Video Studio. Each year, the studio hosts some 25 video artists and filmmakers, supporting specific projects at various stages in the postproduction process and offering artists distraction-free time and space to complete their pieces. Bárbara Wagner and Benjamin de Burca worked in the studio on RISE for three weeks during the summer of 2018. Commissioned by the Art Gallery of York University and premiering at the 2018 FRONT International Cleve-land Triennial for Contemporary Art, RISE won the Audi Short Film Award at the 2019 Berlin International Film Festival. For more information about Picture Lock and the Film/Video Studio, visit wexarts.org.

Combining the traditional strategies of documentary and ethnographic filmmaking with a strong dose of cinematic aesthetics, Wagner and de Burca explore the tensions bet-ween fiction and nonfiction and reality and fantasy. while discovering the possibilities for representing marginalized communities that emerge from these intersections. The artists are interested in portraying the “popular body” and how individuals (often from the margins) position themselves within the contemporary public sphere by drawing from the products of mainstream culture (music, dance, fashion), but subverting their more negative associations (misogyny, homophobia, etc.). A sincere desire to understand and represent subsets of mass culture inspires Wagner and de Burca to rely on the participation of community members in explicitly collaborative projects.

Using music as an entry point, Wagner and de Burca have made a series of videos focused on specific communities and musical genres including Brazilian frevo (Faz que vai/Set to Go, 2015), Brazilian tecno brega (Estás vendo coisas/You Are Seeing Things, 2016), German Schlager (Bye Bye Deutschland! Eine Lebensmelodie/Bye Bye Germany! A Life Melody, 2017), and evangelical music in northeastern Brazil (Terremoto santo/Holy Tremor, 2017). In their most recent film, the two artists turn their lens beyond Brazil to the outskirts of Toronto and a community of young poets, rappers, and musicians known as R.I.S.E.

Created by Canadian poet Randell Adjei in 2012, Reaching Intelligent Souls Everywhere (R.I.S.E.) is a movement structured around the practices of spoken-word poetry and songwriting, and the ways in which they can be used to share personal stories and experiences. Since its founding, R.I.S.E. has expanded to include performing arts and music and is focused on the idea of “edutainment,” a blend of education and entertainment. The group is based in Scarborough, Ontario, a neighborhood on the outskirts of Toronto comprised primarily of young first- and second-generation Canadians of African and Caribbean descent.

A hip-hop opera in four acts, RISE uses the rhythms, beats, and poetry of this incredible group to open a window onto a complex diasporic community. Set entirely within a new subway station purportedly connecting Scarborough to downtown Toronto, RISE focuses on this new generation of artists, whose rap and hip-hop musical styles express hopeful messages of love, justice, and work. In the same collaborative mode as their previous videos, Wagner and de Burca partnered directly with R.I.S.E. members, who created all the musical material in the film.

The filmmakers reflected on their practice in an interview with Artebrasileiros. “This place where rather than ‘give voice’ you attempt to hear or talk together is possibly a place of resistance. Because it shows how these groups that we find, these artists, create their own way out to resist in the world. And working with them is, therefore, to participate in the construction of these forms of resistance.”

Lead image courtesy of the artists 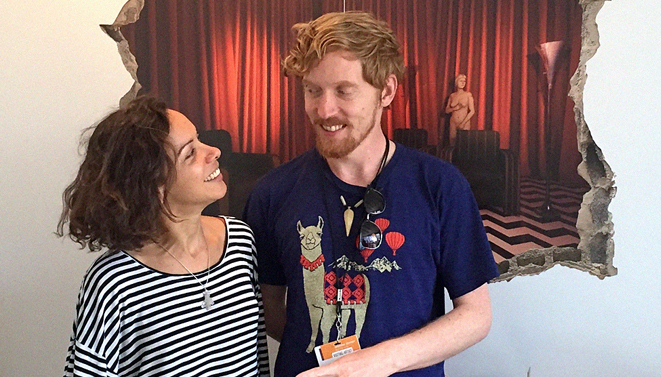