Columbus artist Bethani Blake is back with a new art tutorial inspired by the worlds of gaming. This week, you're invited to take out your painting supplies and join her in creating a miniature environment like the spaces you see in classic versions of Super Mario Bros. Have fun with it!

A transcript for the hearing impaired is available below the video.

Hello everyone! My name is Bethani Blake and today we’re going to build our very own miniature environment from the original Mario Bros.

First let’s start by taking an acrylic paint pen or pencil and drawing a line about an inch and a half up from the bottom of your 11 by 14-inch yupo paper, canvas, or panel. It does not have to be perfect.

Paint the area above the line blue.

Let it sit for about 5-10 minutes to dry and then add a second layer of paint.

You’ll want to paint the blank space under the line, a brick red color.

Let it dry and add a second coat.

Next, grab your pencil and draw two rectangles stacked on top of one another. This will be a green pipe just like the ones Mario and Luigi use.

Draw a shrub to the right of the pipe and a floating rectangle about halfway up the picture plane.

We also need to draw the Goombas. Make an ice cream cone and then add two circles for feet.

Add in a hill on the left side of the pipe.

Next I’m drawing in two clouds, one longer than the other.

Since this is based off of a screenshot in the game, we’ll add in some text at the top.

Write Mario in all caps, followed by the score underneath, the coin count and the world and time components.

Next, grab a darker green and fill in the hill.

Using a pure white, fill in the clouds. It’s just like a coloring book.

After that, fill in the floating rectangle with that same brick red color that you used for the ground. Add another layer to the ground portion.

You’ll also add another coat to the clouds as well.

Take your light green and add a second layer to the pipe and shrub. You want to make these objects as opaque as possible. Add another layer to the hill.

Taking a warm tone brown, fill in the tops of the Goombas’ heads.

After that, fill in the floating rectangle once again.

Add a third layer to the pipe, shrub and hill. They’re starting to look pretty good!

The clouds need one last layer as well.

Add an apricot color to the Goombas’ bodies.

Next up, you're going to draw a black line halfway through the ground.

I’m filling in the Goomba’s shoes with that same black.

Next I’m outlining the text with white.

After, I am drawing vertical lines through the ground to form little boxes.

Taking a darker green, draw a thick line vertically on the pipe. Flank this thick line with two thinner lines on the left. Then add two little lines to the shrub and two dark dots to the hill.

Give your Goombas unibrows and start adding light blue accents to the clouds.

Taking a golden yellow, create a square three-quarters of the way through the floating rectangle. This will be a mystery box.

Next it’s time to add detail to the ground. Draw a checkmark and a dash in each block. Repeat this process in black.

Add another layer of dark green to the pipe before adding a light green to the edge and center. Then you will begin to outline the shrub, clouds, hill and pipe with a black outline.

Add a peach-colored line to the top of the ground and the underside of the checkmark and dash.

Draw two horizontal, black lines on the floating rectangle and then create the appearance of bricks by drawing in horizontal lines. Make sure you stagger them.

Give the Goombas two yellow eyes.

Add in an orange line to the top of the yellow box. Add a question mark and a dot in each of the four corners.

Using that same color, fill in the coin next to the 22.

Take a brown color and fill in the body and legs.

I’m using an apricot color for his skin.

Draw a black half-circle around the coin.

Once the brown is dry, give Mario a red hat and overalls, leaving his arm and shoes brown. Don’t forget to give the Goomba’s pupils!

Give Mario some hair, sideburns, an eye and a mustache before half outlining the question mark with black.

Add some darker red shadows on his overalls and give him a white dot on his hat and Mario is good to go!

And then you have your very own miniature environment! 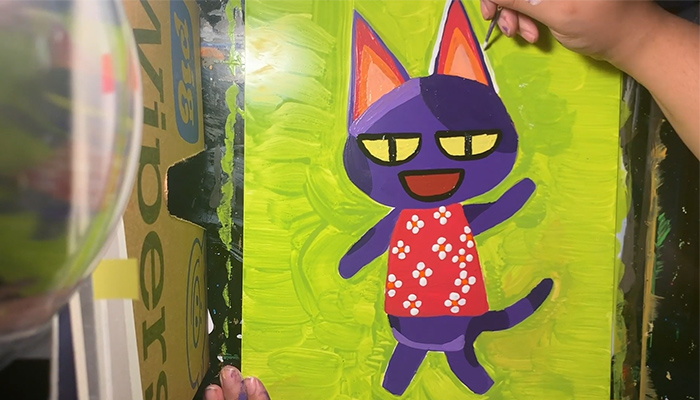 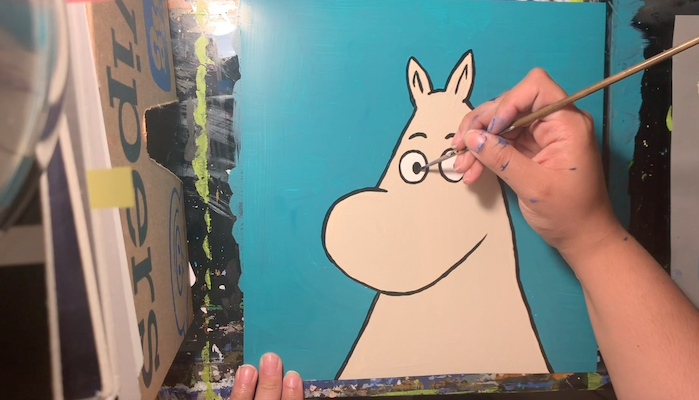