A fixture at the Wexner Center almost since the day it opened, our projectionist Bruce Bartoo is retiring on Friday after 28 1/2 years in the booth overseeing approximately 5,000 films. It is an understatement to say that our film program would not have been able to have achieved all that it has over these many years without his expertise and devotion.  Bruce represents a bank of film projection knowledge that is essentially impossible to replicate in a field where digital projection is now the standard, and his taste for a bit of showmanship often meant little touches such as on point (or ironic) walk-in music, a faithfully executed William Castle gimmick (or as close as possible), seamless changeovers, and other flourishes inspired by his many, many years running movie theaters and projecting at the Wex.

Our booth is not just a cold, colorless room holding our projection equipment. It's very much been Bruce’s space. Unless you have paid a visit, you likely are not aware of the massive collection of movie trailers (and related filmic ephemera) that Bruce has amassed over the years, much of it stored in every nook and cranny of the booth. It’s been wonderful to see the looks of appreciation and even astonishment as filmmakers have visited over the years and first come in contact with the stacks of cored trailers lining the shelves and benches. It’s a small thing, but it helped to make a guest’s visit even more memorable than the typical screening and Q&A. And Bruce’s collection helped make our multiple series of B-Movies in the late '90s and early 2000s truly special, as each feature was preceded by a collection of the most oddball and arcane drive-in promotions and trailers from horror, sci-fi and exploitation films you can imagine.

"Our booth is not just a cold, colorless room holding our projection equipment. It's very much been Bruce’s space."

What even fewer people know about is Bruce’s ongoing tradition of having guests sign a baseball during their visit. It’s a collection that began before Bruce’s time at the Wex and often continued to grow in parallel to the balls he was accumulating running our booth. But the balls he did collect at the Wex serve as an effective timeline and “who’s who” of filmmakers and artists who have passed through our theater. Bruce had a ball signed by Roy Lichtenstein during his retrospective at the center in 1995. He has balls that were signed by cartoonists Art Spiegelman, Matt Groening, Roz Chast, Jim Woodring, Bill Griffith, and Lynn Johnston. And it is too long a list to name all of the filmmakers who scribbled their name on a ball for Bruce, but it includes Martin Scorsese, Spike Lee, Jeanne Moreau, Milos Forman, Mike Leigh, Joe Dante, Claire Denis, D.A. Pennebaker, Richard Linklater, Guy Maddin, Josephine Decker, Ellen Kuras, Charles Burnett, the Quay Brothers, Liza Johnson, Barbara Kopple, Penelope Spheeris, Kelly Reichert, Pedro Costa, Kleber Mendonca Filho, Lucrecia Martel, John Canemaker, Julia Reichert, and Steve Bognar, and Columbus’s own Jennifer Reeder, for just a sample. To the best of my knowledge, only one person has declined (I won’t mention the name) although more than a few were a bit taken aback to be asked to sign a baseball for the first, and likely only, time in their lives.

For years, I have dreaded the day when Bruce would decide that 28-plus years of odd (and late) hours was enough. Of course, it will be difficult to replace Bruce’s wealth of knowledge and experience. But it will be equally as hard to replace Bruce’s spirit, which gave so much personality to our program. There are a lot of great war stories to be shared, about memorable nights (and a few forgettable ones, but those are best kept for a select few).  We’ll miss you Bruce. No more watching for the cue dot. 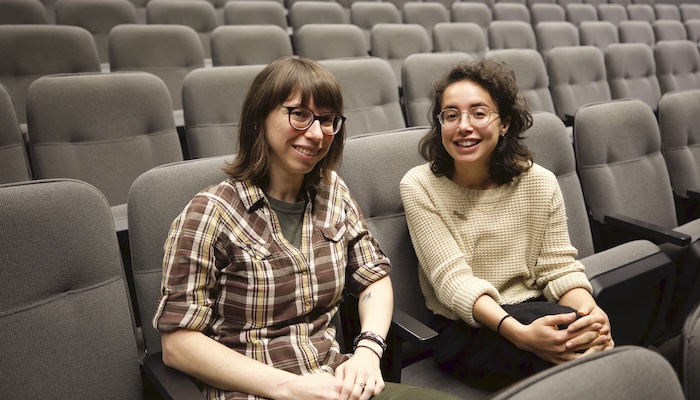